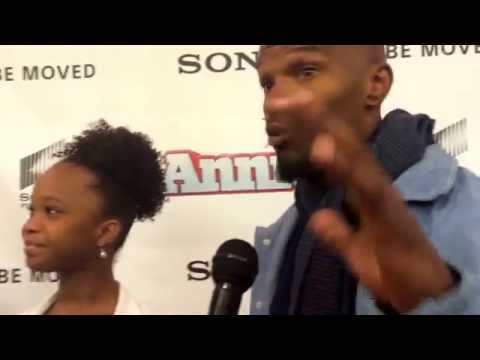 Last week, I headed to Mall of America where I had an opportunity to talk to the stars of the upcoming Annie movie remake.  I have fond memories of watching the Annie movie as a child (I’m dating myself here, but I remember the 1982 version starring Bernadette Peters and Carol Burnett).  Plus, who turns down a chance to talk to Jamie Foxx up close and personal?  Not this girl!

The new version is set in New York city, but instead of portraying the lead character as an orphan, this time around Annie a foster child.  Quvenzhane told me in all of her eleven-year-old wisdom, “What makes it pretty recent is that you have cell phones, electrical stuff…”   Jamie Foxx, Quvenzhane Wallis and Will Gluck were in attendance at this red carpet event to answer questions.   Afterward, local members of the Boys and Girls Clubs of America were treated to a special movie screening and surprise appearance by the cast.

Check out some of my photos below.  No zoom lens required!  I was really this close to the cast.  It was amazing, and I can’t wait to see the movie!

A Broadway classic that has delighted audiences for generations comes to the big screen with a new, contemporary vision.  Academy Award® nominee Quvenzhané Wallis (Beasts of the Southern Wild) stars as Annie, a young, happy foster kid who’s also tough enough to make her way on the streets of New York in 2014.  Originally left by her parents as a baby with the promise that they’d be back for her someday, it’s been a hard knock life ever since with her mean foster mom Miss Hannigan (Cameron Diaz).  But everything’s about to change when the hard-nosed tycoon and New York mayoral candidate Will Stacks (Jamie Foxx) – advised by his brilliant VP, Grace (Rose Byrne) and his shrewd and scheming campaign advisor, Guy (Bobby Cannavale) – makes a thinly-veiled campaign move and takes her in.  Stacks believes he’s her guardian angel, but Annie’s self-assured nature and bright, sun-will-come-out-tomorrow outlook on life just might mean it’s the other way around.