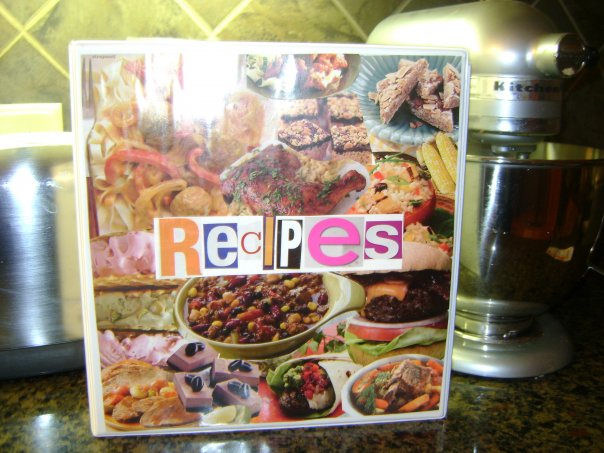 One of my favorite homemade gift ideas is the homemade family recipe organizer/binder.  I’ve given several of these books to family members over the years.  It’s inexpensive and easy to make, yet very personal at the same time.  All you need is a three-ring binder and a stack of family recipes.

To create mine, I took all the contents of my recipe file and photocopied it.  A lot of the recipes were handwritten by my grandmother and mother, so by photocopying them instead of typing out the actual recipes I felt I was capturing part of their personalities.  Some were magazine clippings, others were from friends, some were printed off the internet.   On some of the pages, I wrote memories about the recipes relating back to when they were served, things I remembered about people they came from, or any tweaking I’ve done to them. I assembled them all in a 3-ring binder with plastic sheet protectors to save the pages from spills.   I also created tabbed dividers to separate the recipes into categories like soups, main dishes, appetizers, desserts, and so on.  My daughter made a cover out of photos she found in magazines. The entire recipe binder/organizer gift project usually costs less than $10, and is hands-down a better idea than an expensive cookbook you’d buy somewhere else.  Another great about it is that it’s really easy to make multiple copies at the same time.  Just purchase as many 3-ring binders as recipe organizers you’re making.  When you’re photocopying the recipe sheets, just make multiple copies for in-laws, siblings, and other extended family members who may appreciate this gift.