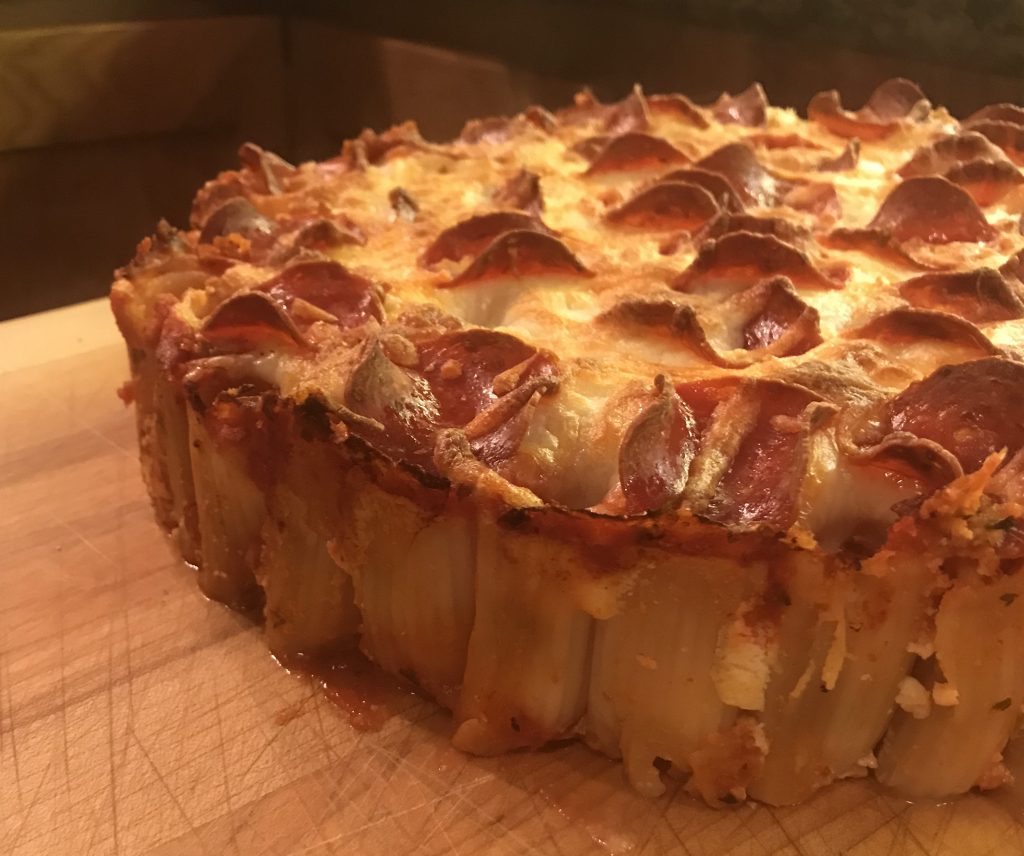 Not sure if you want pizza or pasta?  How about BOTH!  This rigatoni pizza pie looks like a pizza, but instead of a crust you’ve got noodles to soak up the sauce.

Preheat your oven to 400 degrees.  Prepare the rigatoni to AL DENTE texture, about 8 minutes.  Drain.  If you boil them too long, the tubes will break.  Don’t make that mistake.

In a large bowl, combine the ricotta cheese, eggs, and milk.  Season with salt and pepper.

Transfer the noodles back into the pot in which you cooked them, adding 1 tablespoon olive oil, 1/2 cup of the mozzarella and 1/4 cup of the Parmesan cheese.  Stir to coat the noodles.

Wrap the bottom layer of your springform pan with aluminum foil to make cleanup easier.  Next, add a little bit of pizza sauce on the bottom to prevent sticking.

Layer your noodles in the pan, standing them upright, starting with the outer layer.

Pour the cheese mixture over the top, making sure it gets down inside the rigatoni tubes.

Spoon over the remaining pizza sauce.

Next, add the cheeses and top with pepperoni.

Bake for 30 minutes until the cheese is golden brown.

NOTE:  I had a ton of fun lining up the rigatoni in the pan.  I guess I’m nerdy like that.  But, it made me think of all the possible variations you could do with this dish.  A chicken Alfredo version would be good, or a pizza using pork sausage instead of pepperoni.  You could even do something a little bit healthier by using whole wheat rigatoni with a veggie topping “pizza”. 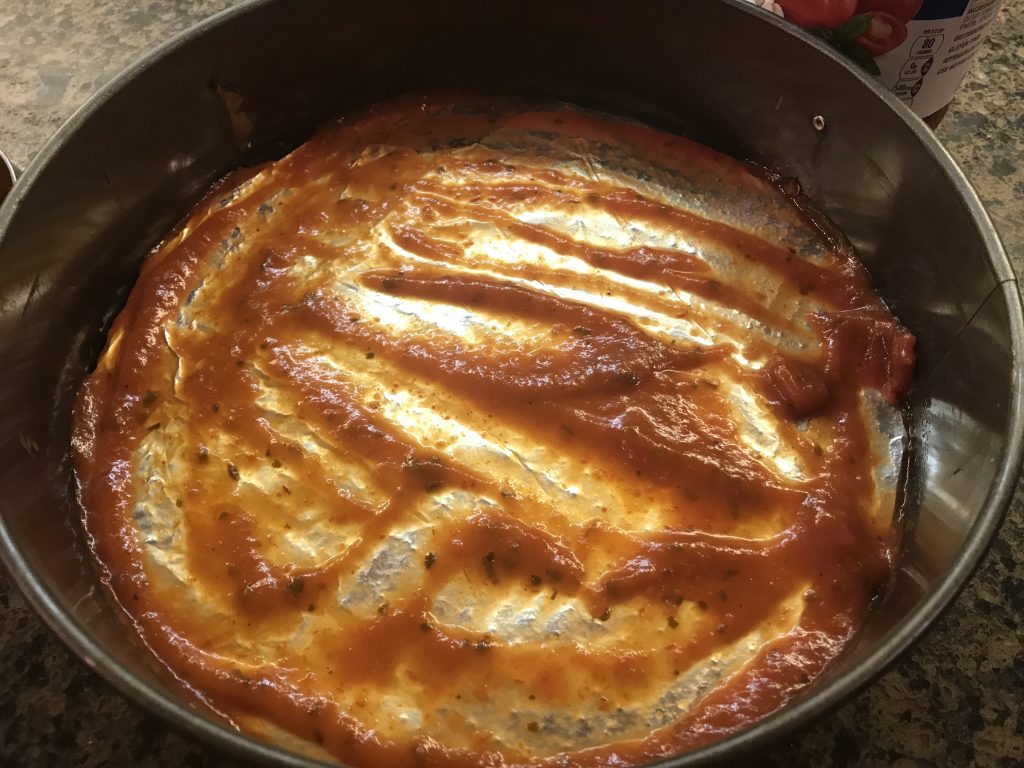 Cover the bottom of your springform pan with aluminum foil.  Spread about a 1/3 cup of the sauce on the bottom so the noodles don’t stick.

Now comes the fun part… standing your rigatoni noodles up in the pan. 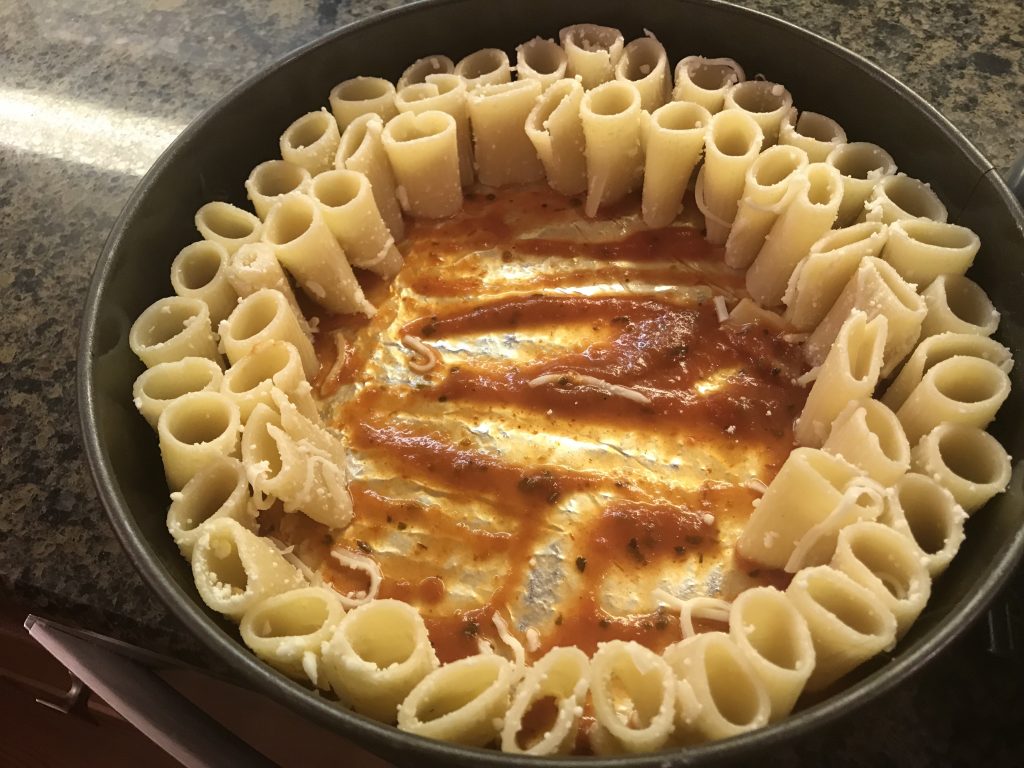 Start with the outer layer.  Then, add more noodles on the inside. 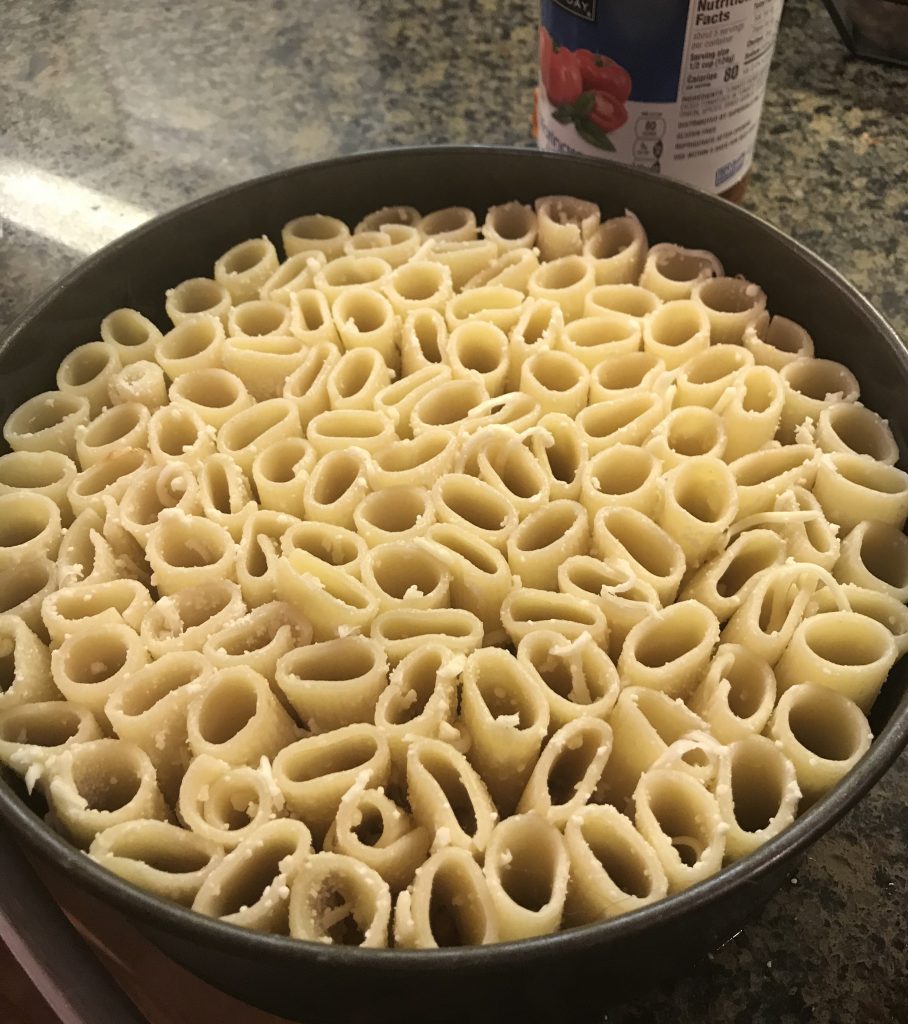 Don’t stop until the entire pan is filled.

Next, pour the ricotta/egg mixture over the noodles.  Press gently with a spatula, making sure it sinks down into the tubes. 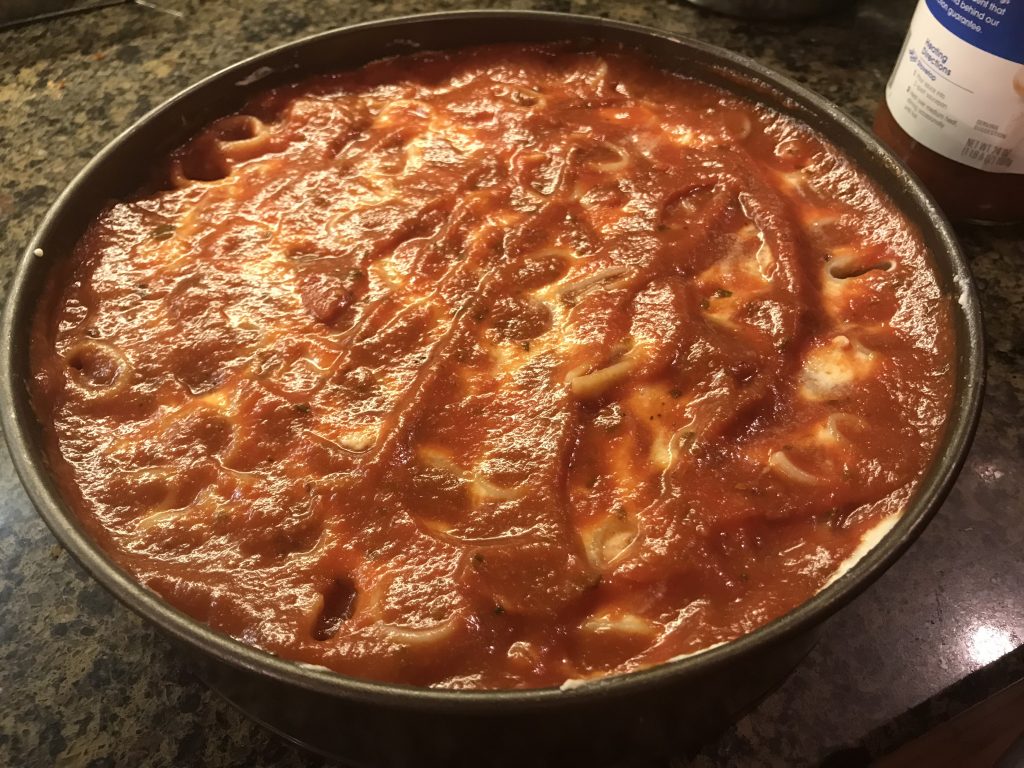 Follow up the ricotta layer by adding the remaining marinara/pizza sauce. 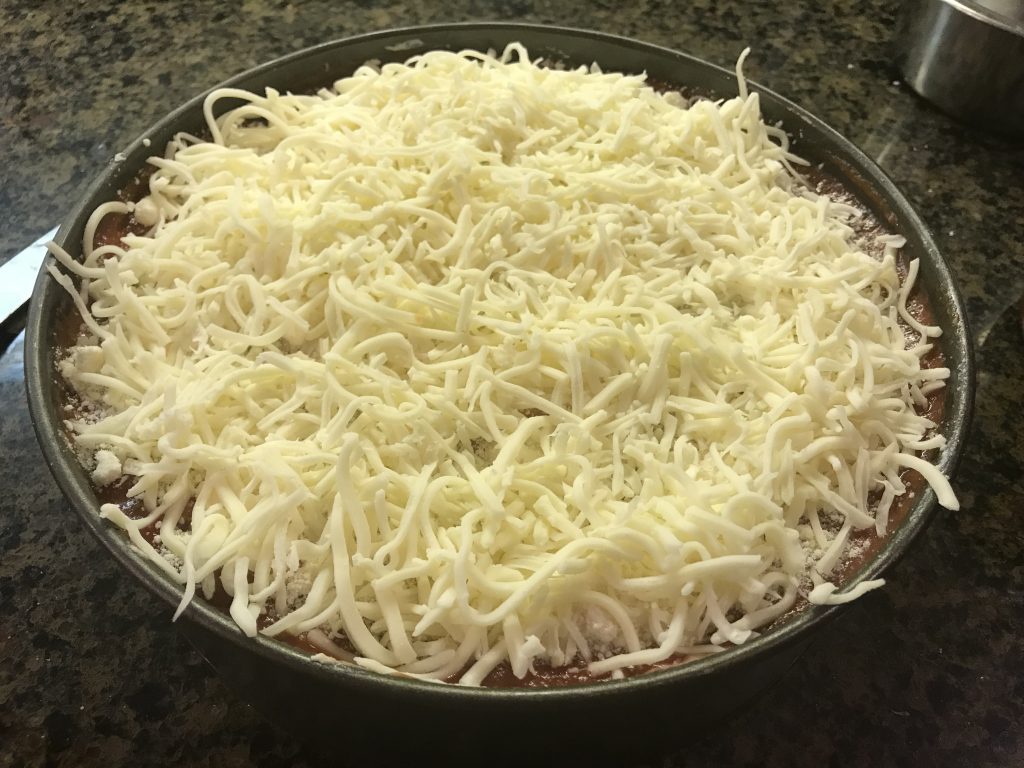 Add your Parmesan and Mozzarella cheeses, then top with pepperoni. 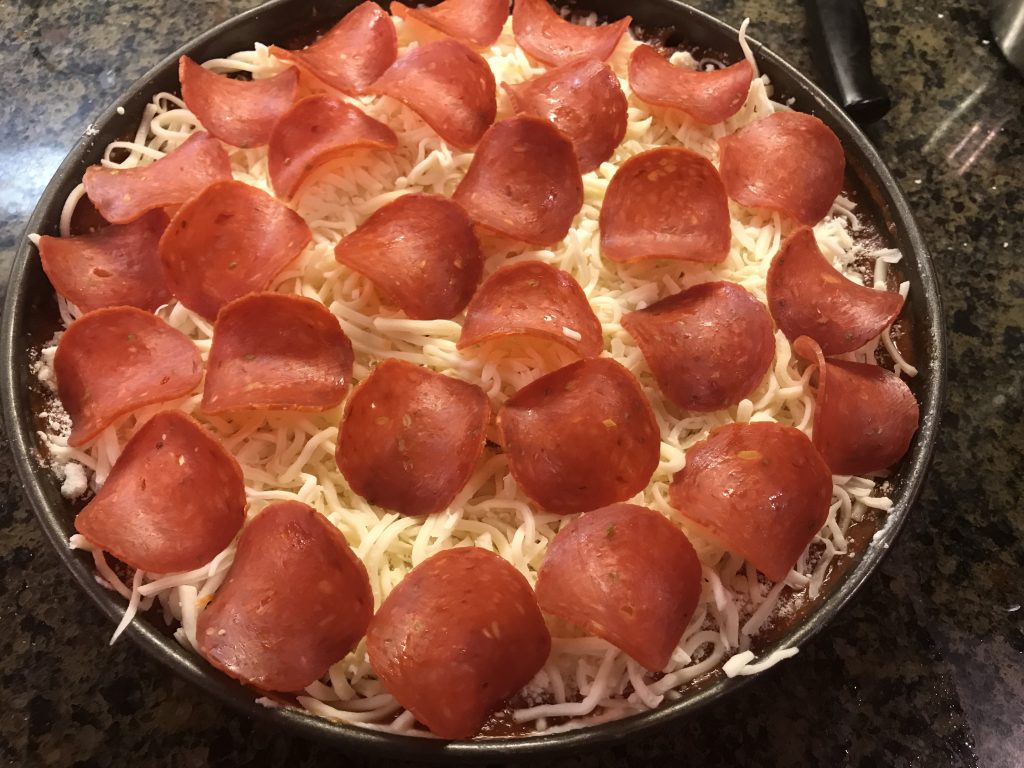 Bake at 400 degrees for about 30 minutes, until golden brown.  I broiled mine at the end for a couple minutes to get the cheese the perfect golden brown. 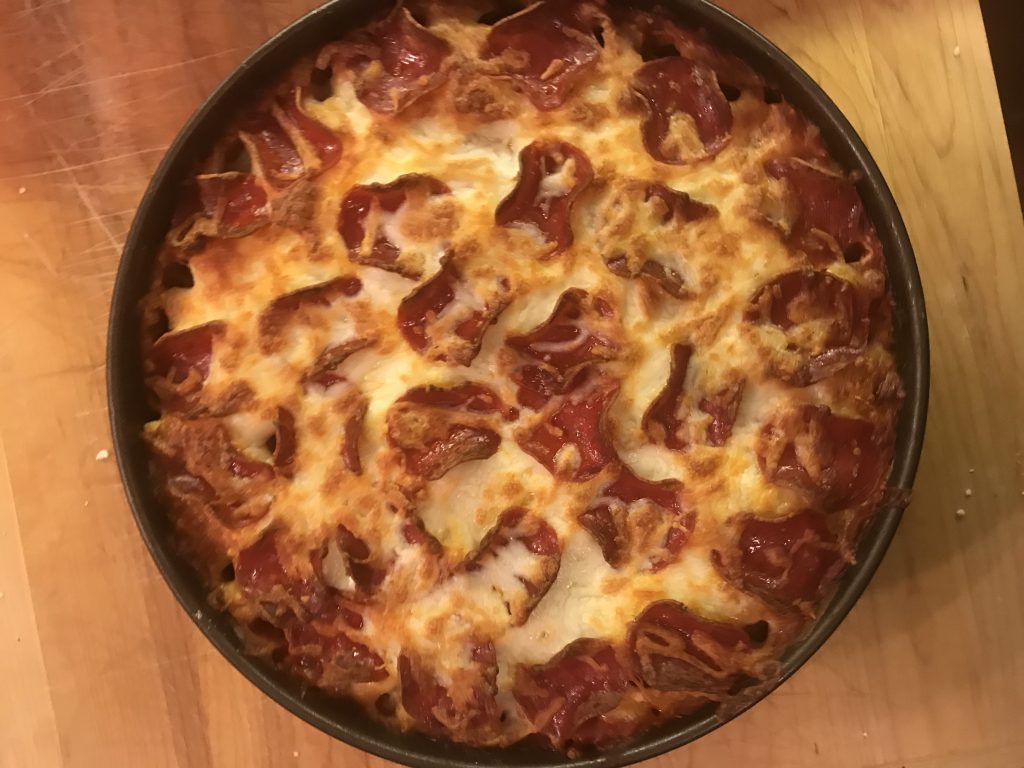 This recipe was inspired by the Delish Cookbook I just got for Christmas.  Seriously, every recipe looks AMAZING, and most of them are family-friendly.  Do check it out for some great recipe inspiration!