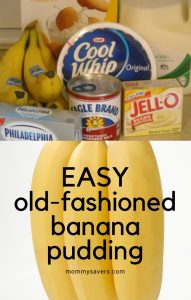 Banana pudding is one of those comfort foods that takes you back to childhood.  My grandfather used to make banana pudding every 4th of July.  This is a Paula Deen-inspired version that I adapted to my own taste.  It’s rich, creamy, and with only seven ingredients, so easy to make!

The cookies really soak in the pudding and create a cake-like crust.  the combination of the flavors in the pudding mixture is delicious!  It’s rich and creamy without being overwhelming.  It tastes kind of like pudding from scratch but actually no cooking is required!

This recipe is perfect for potlucks and parties.