If you’re like me, your husband may need some fashion guidance.  Or, he may need a little bit more than just guidance… he may need a personal shopper.  In most cases, that personal shopper turns out to be YOU.  We recently asked our Mommysavers Facebook Community where they shop for the best deals on men’s clothing.  Here are some of the places they mentioned most often:

TJ Maxx has been around since the mid-1970s, and is part of the TJX brand which also owns Winners in Canada and Marshall’s and Homegoods in the United States. To me, it’s better than outlet shopping since such a small percentage of their merchandise is irregular (I’ve heard as little as 5%).  Plus, they have many of the same brands you’d find at department stores like Macy’s and Nordstrom, but at 20-60% off.

Here, you’ll find athletic brands like Reebok, Puma, and Under Armour as well as dressier brands appropriate for the such as Calvin Klein and Polo.  You can shop online at TJMaxx.com and return items for free at your local store, but be warned:  the online selection is not nearly as deep as what you’ll find in the store.

TJ Maxx an upscale department within some of their stores and online called “The Runway” in which you may find designers like Gucci, Versace, Vince, Rag & Bone and True Religion.  “The Runway” items are set apart from the other merchandise with a purple sticker.  They aren’t always past season merchandise, either.  Sometimes TJMaxx buyers will purchase the remainder of a lot that was sold to Macy’s or Nordstroms, but at a discount because they don’t have a buyback clause like high-end retailers do.  That way, they’re able to pass on savings to consumers.

TIPS:  Look for markdowns.  Red-stickered items are on clearance, yellow stickers indicate a final markdown.  If you find something with a flaw, which is pretty rare, ask for an additional discount.

Like TJMaxx and Marshall’s, Ross (whose full name is officially Ross Dress for Less) is an off-price retailer that offers national brands at deep discounts from 20-60%.  The store launched in California, and has been expanding mainly in the West and South.  In 2018, they have more stores than TJ Maxx and plan to open 100 new locations, expanding into the midwest.  They turn over their inventory quickly, so shopping often is the key to scoring great deals.  They have a great selection of name-brand shoes. 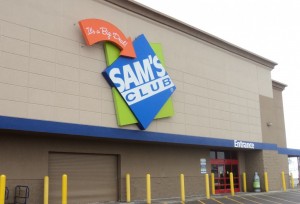 For those men that dress in business casual attire, you’ll typically find brands like Calvin Klein, Perry Ellis, Chaps, Eddie Bauer and Van Heusen at Warehouse stores like Costco and Sam’s Club.  You’ll also find casual brands too, as well as underwear, socks, and seasonal items.  You can also shop online at samclub.com.

TIPS:  At Sam’s Club, you can also find markdowns on their already low-priced items.  Look for items that end in an $.81 or $.91 – those have had further markdowns.

If you like the brands and quality you find at Nordstrom, but don’t like the prices, checking out Nordstrom Rack is a budget-savvy move. They have the quality brands that Nordstrom does, but at prices significantly lower prices.  Plus, their markdowns are amazing.  The do order larger lots just for their Rack stores, but generally the merchandise is the same.

TIPS:  During their end-of-season ‘Clear the Rack’ sales you’ll also be able to take an additional 25% off already low prices.  There is a smaller selection online at nordstromrack.com.

Kohl’s shoppers know this:  Never pay full price at Kohl’s.  When shopping there, you have to realize that everything goes on sale eventually.  The longer you wait for things to get marked down and put on clearance, the deeper the discounts.  It’s not unusual to find things 70-80% off.  When you pair those deals with Kohl’s Cash incentives, you’ll save even more.  Kohl’s cardholders are also privvy to extra incentives and coupon codes.

TIPS:  Shop their sales online at Kohls.com.  You can ‘stack’ up to four coupon codes on a single order, so take advantage by looking for all the codes you can use that you can apply to your order.

Kohl’s has an electronic price tag/coding system to track markdowns and place signage. Codes appearing in the upper-right corner of an LCD pricing sign will indicate what type of sale they’re running:

BB = Bonus Buy (meaning Kohl’s bought a lot of these from a manufacturer at a ridiculously low price)
BGH = BOGO (buy one get one half off)
PP= Product Placement (meaning the sale price is fixed by the manufacturer or Kohl’s and not discounted)
S = Sale: (meaning the item will be on sale for up to two weeks)

If there is a square in the upper-right corner of the electronic tag, that indicates the item is at its lowest price before going on clearance.

Before you roll your eyes at this one, give it a chance.  Target stores sometimes sell their unsold clearance merchandise to Goodwill, so it’s not hard to find brand new items there.  It’s also a great source for gently used dress shirts, ties, jeans, and unique t-shirts and sweatshirts.

TIPS:  Goodwill designates certain days of the week for sales.  The color-coded tags will indicate which items or departments are on sale, and sales can vary by location.  Also, shopping early in the week is usually best.  The majority of donations flows in over the weekend.

Plato’s Closet sells gently used apparel and discounted prices.  You may think of it for teen girls and young women only, but most stores have a small men’s section in the back of the store.

TIPS:  Bring your own gently used clothing in to Plato’s Closet for cash back that you can apply to your own purchase.